Skip to content
Posted on August 12, 2020 by Mike Sullivan

There are dozens of irrational fears out there. While getting attacked by a great white shark in your pool very clearly tops that list, not far below that would be falling down a sewer grate.

I know of people who will actively do whatever it takes to not step on these things. We’re talking bump into oncoming foot traffic or hurdle over it like it’s a pit of lava. And while I normally scoff at those people for having such a silly fear, maybe they have a point..

First thing I thought of here was “Hey buddy, that’s not how you get to the Ministry of Magic. You have to go down a toilet, not directly into the sewer. Come on…”

Secondly, that picture is one of the funniest pictures I’ve seen all year. I mean look at him! Arms crossed, probably a face like “Well are you guys just going to stand there or are you going to pop me out of this bitch?”. I know his face is blurred, but you can just tell he’s about done with this situation. 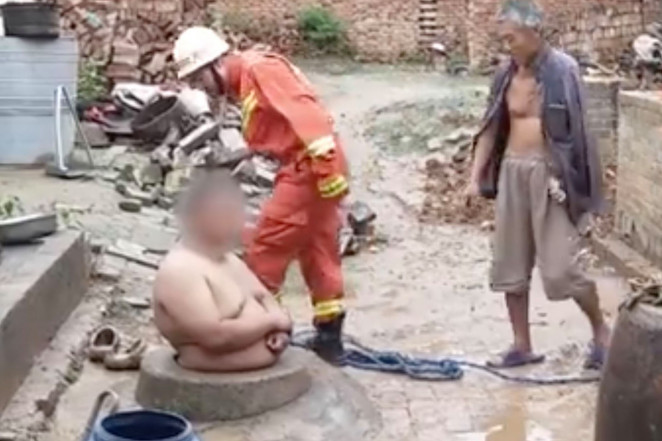 He remained that way as gobsmacked locals watched a team of at least five firefighters tie a strong rope around his waist to finally heave him out to safety — totally unharmed, they said.

“Gobsmacked” is such an underused word. I sometimes forget it even exists. But I too would be pretty gobsmacked if I walked by a team of 5 trying to heave-ho this massive human from this pseudo-Chinese finger trap he’s found himself in.

I still don’t understand how he got lodged in there like a wine cork. It just doesn’t make sense to me. For him to get that deep in there you’d think there would be another force at play other than gravity but hey, it looks like it could have been a rainy day so maybe that rain acted like a lubricant and allowed him to slip on down there with ease.

I have a very big beef with the fire service who helped this 28-year old though. A very, very big gripe. Was this quote necessary?

The fire service had estimated his weight at 500 pounds, although The Sun cited other reports that he was closer to 300 pounds.

What an unnecessary shot at a man who clearly hasn’t had a good day as it is! 500 pounds? Really!? It’s either these firemen haven’t seen that many fat people in their life or they have some sort of vendetta against this guy for forcing them to take time out of their day to unscrew him from the hole he’s found himself in. If this guy was 500 pounds, he wouldn’t even have got past his hips.

Normally there’s a few metal bars or a giant steel cover on top of these death traps, but not in China!

Either way, the force said he was only survived because he was “too fat” to fall down as he seemingly jumped on the wood covering the well.

Another uncalled for fat joke I see.

But listen, I don’t know how what Chinese protocol is on sewer grates like this, but I don’t think simply putting a few pieces of plywood over it is a sufficient way to ensure people don’t jump down this pipe like Mario going underground. Seems like a very half-assed way to protect people from a potential catastrophic event like the one that happened here.

Be better at covering your holes China. Oh, and be better at not spreading diseases either while we’re at it. Thanks.