When you think of a playground, what pops into your mind? Monkeybars**, that spinny thing where you spin it as fast as you can and hold on for dear life, some random horse/zebra-looking spring contraption, a tunnel where the cool kids would go to kiss and a few shitty slides (maybe you’d be special and get a metal one that’d launch you down like you just got shot out of a cannon while simultaneously burning the back of your legs).

**Sidenote about Monkeybars: they were the fucking worst. No one could really use them so all you’d do is end up just swinging from one of the bars until your arms gave out and you dropped to the ground. There would always be that one asshole though, the showoff kid, who could actually monkey across said bars and everyone would treat him like the big swingin’ dingaling of the playground. Those were the kids who probably grew up to be in the NFL or like, a bodybuilder or something because when you’re at the playground age, you shouldn’t be able to Tarzan your way across the monkey bars like a superhero. Asshole. I hate monkeybars. Still do.

Playgrounds are overall pretty boring. But guess what, back in 1912 they were designed like a makeshift WWE Ladder match.

Actual children’s playground, 1912. I shit you not. pic.twitter.com/xZmGi3V9Uq 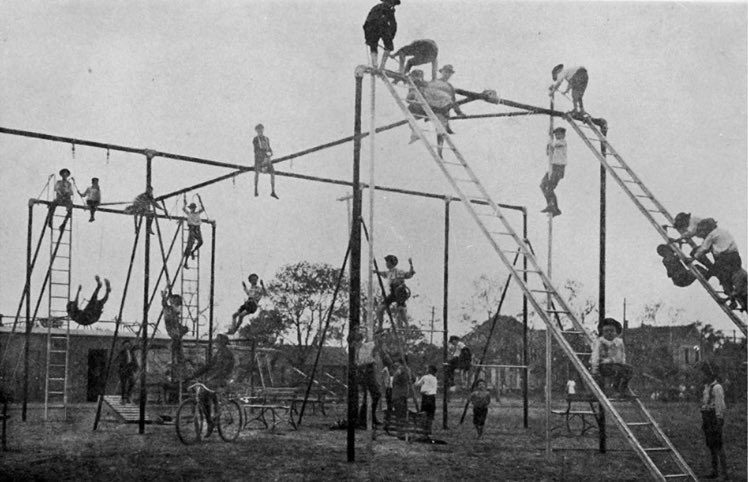 I mean, what am I looking at here? Jeff Hardy would even give some hesitation to climbing no this thing! When I first scrolled past this picture I assumed it was one of those old-timey photos of a construction crew sitting on a big metal beam on lunch break in between building a skyscraper. Not for one second did I think this was a place for children.

First things first, is that kid floating? Looks like he could be standing on a pole or hanging from a wire with his left hand, but that seems unlikely. Just doesn’t look right. Literally looks like he was just copy and pasted smack dab in the middle of the photo. This is definitely a mutant boy. Secondly, why is there a group here looking like they’re getting ready to string someone up by the underpants and run em up that pole? Never trust a group of kids. They’re ruthless when they put all their twisted little minds together so who knows what they’re plotting here. Break it up! But if you’d direct your attention to the right of the picture, you’ll find the second smartest kid on the playground. Looks like he’s high tailing it the FUCK out of there. Smart move little Jimmy, this is no place for children.

What is this kid swinging on? Is he just hanging from a rope dangling from a pole 30 feet in the air? Is he falling? This is like high stakes monkeybars. 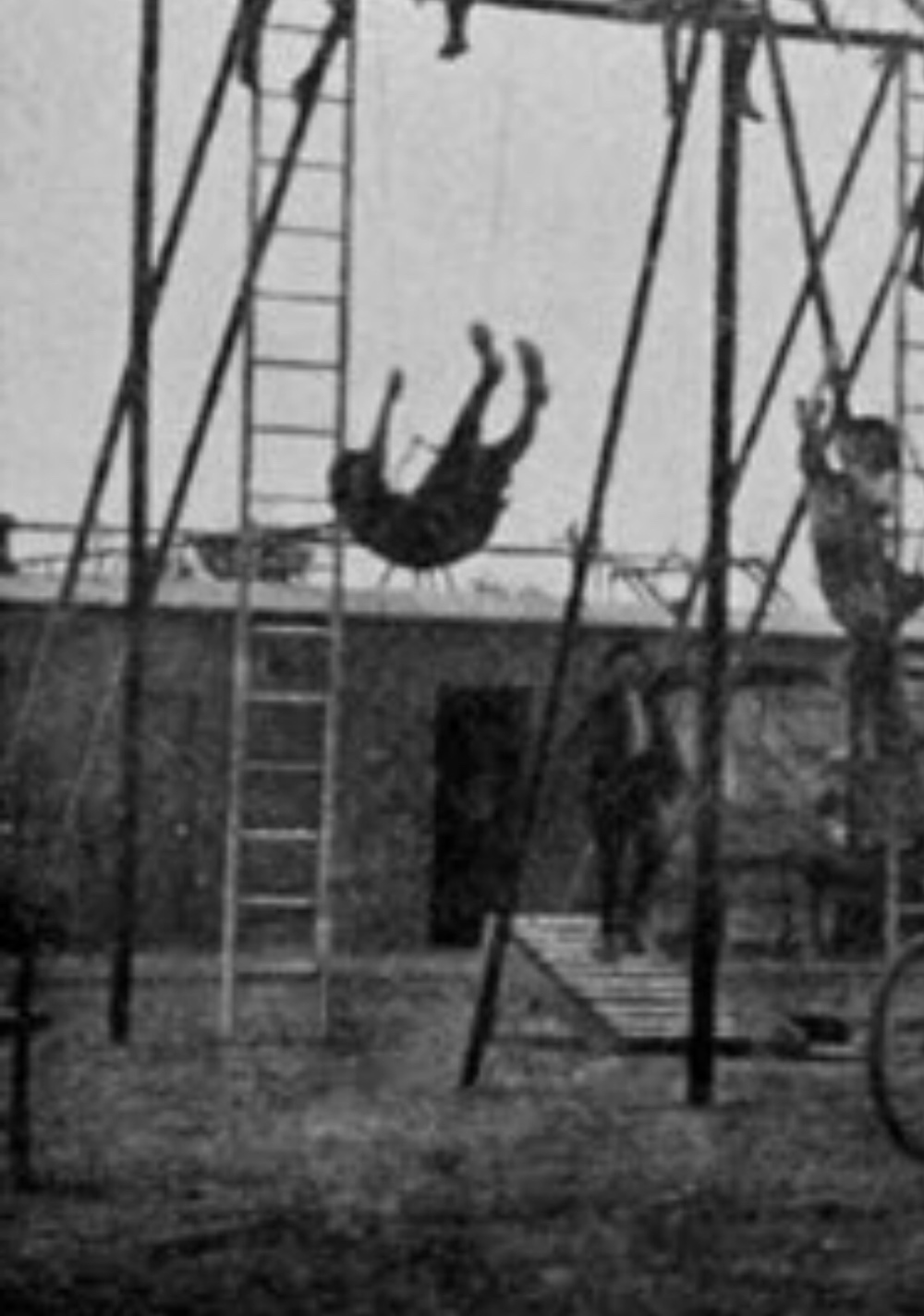 This kid is definitely on a swing…but I genuinely have no idea how these kids are getting onto these swings. I see the ladders, but like, are they just leaping with a hope and a prayer to actually get to the swing? (there’s also a very high possibility that this kid is plummeting to the ground)

Another swing kid! How are they getting up there!? Looking at this picture as a whole, there is no way humanly possible that he got onto this swing. I can’t comprehend it. Physically, logistically, it just doesn’t make a lick sense. Maybe that’s what that group of kids is for? They just toss you up to the swing like you’re the flyer in cheerleading?

There’s a lot going on in this one, so I’ve gone ahead and drew colorful circles so you can follow along:

Green Circle: Smartest kid on the playground. Just watching everyone else make bad decisions while he chooses life over certain death. He’ll be the kid who does all his homework and studies extra hard while his roommates are shotgunning Four Loko’s in college every night. Stay smart kid.

Purple Circle: Second guessing what is sure to be a bad decision. Probably got halfway up that ladder and was like “Nah, not worth it. I’m just gonna climb right on down here and hang out with Smart Sammy over there and watch you all risk life and limb.”

Red Circle: This is attempted murder, right? I mean there’s no other way to put it. These two backyard bullies are trying to pry that other kids hands off the ladder so he falls to his death. Looks like there’s even a third troublemaker climbing up to join the violence! WHERE ARE THE PARENTS!?

Future firefighters here. Sliding down a 16 foot pole as a young child is amazing considering I probably couldn’t do that as a 28 year old. Oh, and how’d I guess this was 16 feet up? If you look at the ladder in the big picture you can see there’s about 16 rungs in between the ground and the pole. I figured each rung was about 16 feet apart and, if we do some simple math, that would mean these kids are climbing SIXTEEN FEET IN THE AIR. Insane. Or maybe he’s climbing up the pole? That’d be 100x more impressive actually.

A silent guardian, a watchful protector…the Dark Knight of the Playground. Kid would probably run circles around everyone on a regular set of monkeybars. Douchebag.